As we reflect on retro Boston and all the fine stores that once were located within the central shopping area, we must not forget to pay homage to the once thriving business hub located in Dudley Square.

Dudley Square in its heyday gave Boston a run for its money in choice and allure. Plus the added bonus of being located on the convenient and speedy Washington Street elevated line made it a pleasant and desired location for merchants and shoppers alike.

Timothy Smith had a thriving department store there and was well established by the turn of the 20th century...but we must not overlook one of the oldest and most revered furniture dealers in New England, Ferdinand’s!

Frank Ferdinand much like Timothy Smith had a knack for business and creative selling techniques.
His successful venture began in a modest two-story structure, painted blue in the heart of Dudley Square in the year of 1869. The use of trademark blue on this and all other Ferdinand buildings may be linked to Frank’s seafaring past prior to his life as a prominent Roxbury merchant. He sold furniture and a wonderful assortment of various wares for the home at reasonable and very competitive prices.

The business took off and became part of the fabric and staying power of Dudley Square. In the mid-1890’s Frank Ferdinand oversaw the construction of the beautiful iconic building that still to this day sits proudly in the heart of the square.

The Ferdinand Store prospered and carried on attracting business from all over New England until it needed even more space and an eight-story annex was built in 1922 to be added to the ever expanding set of buildings on this famous corner. The new annex was directly connected to the elevated station at Dudley Square and allowed easy access to all the elevated riding patrons. The store now covered a healthy amount of acreage in display floor space...so much to see and choose from!


Sadly, Frank Ferdinand only lived a few months more after the great annex was opened. He had established a legend and that legend stayed under his family’s control until it was sold 1971 to Hugh Allen. The business thrived during the first half of the 20th century and even spawned two branch locations for a short time, one in Needham and one in Central Square in Cambridge.

Ferdinand’s, like all the once great Boston stores, began to suffer the decline in business in the late 1950’s brought on by the heavy suburban competition. The branches were gone by then and the flagship store crept along through the 1960’s. 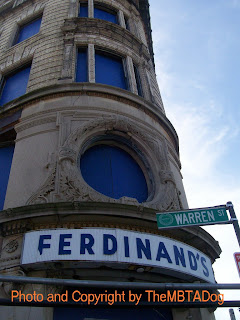 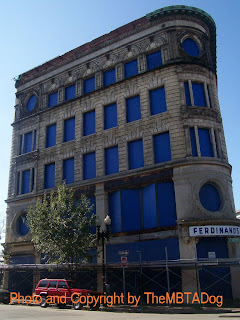 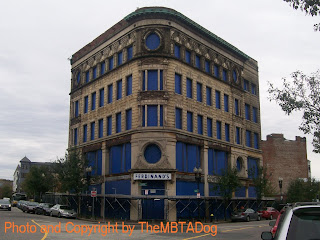 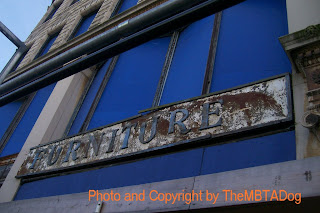 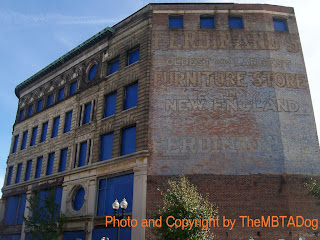 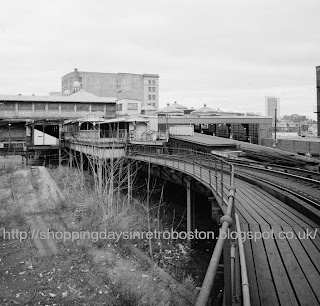 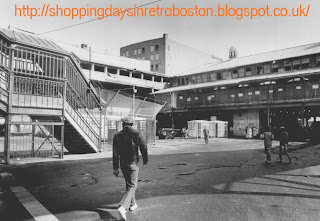 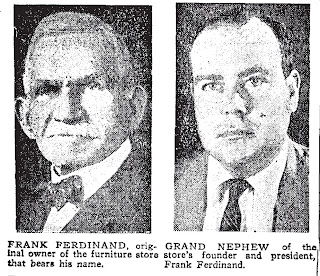 Very little is known about the final years of the store except that it was sold after just one hundred years of Ferdinand family control in the start of the 1970’s. The new owners did try to rent some of the space to the State for a much needed community college in 1972 but that never came to be. The store seems to have ceased operation entirely by the mid-1970’s and the once thriving corner became dormant and derelict.

Dudley Square went into freefall with many buildings falling victim to raging fires which left large sections of the former mercantile area gutted and unusable.

The community cried out and it has taken decades for preservation and rehabilitation efforts to come through and answer their pleas. The Timothy Smith Store building location was lost to neglect and far too much red tape...the site has since been rebuilt now with new structures...but no trace remains of the once great store. 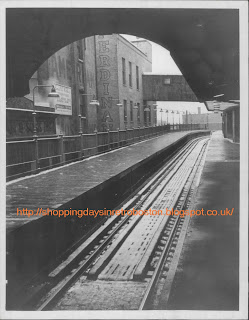 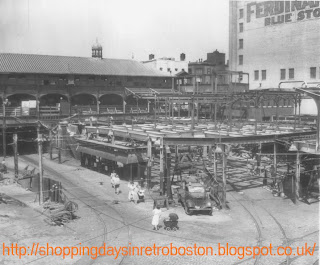 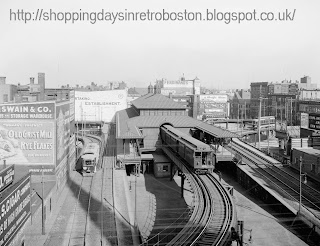 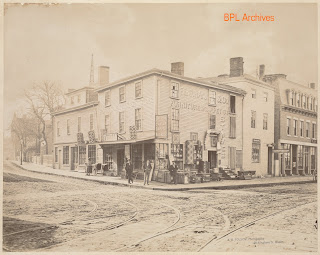 Ferdinand’s classic 1890’s building is set for redevelopment along with the rest of the former retail site. The other shorter building and the once great annex have all vanished now...but the Victorian treasure remains sitting proudly on the famous corner. The plans for redevelopment keep the majestic focus clearly on the former “Blue Store” and that is a great tribute to Frank and his entrepreneurial vision. Dudley Square deserves a crown jewel and thank goodness, city planners have not lost sight of that!

Enjoy this collection of photos(including many wonderful shots by TheMBTADog), advertisements and articles all celebrating the once great Ferdinand’s of Dudley Square...Home of Fine Furniture.

A BIG THANK YOU, again to TheMBTADog for sharing his fine photos with us!!

Don't forget....I am still working on my Jordan Marsh memory project. Write me!!!! 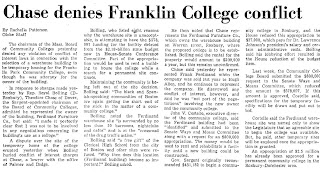 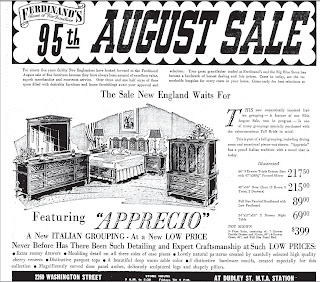 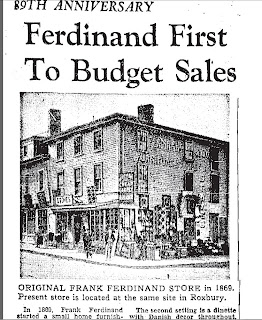 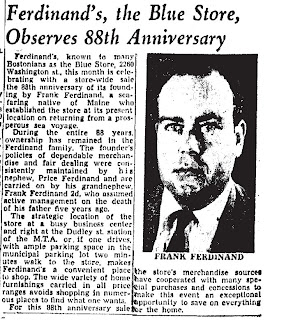 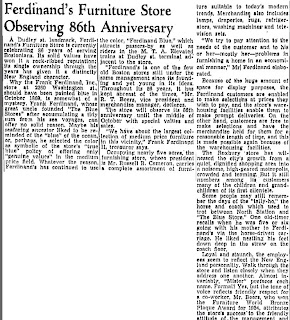 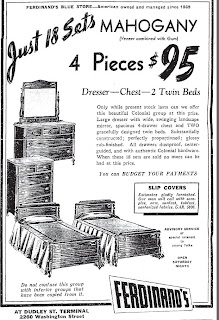 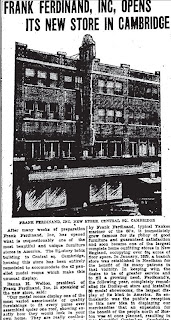 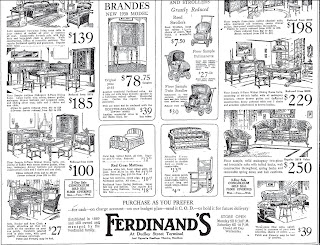 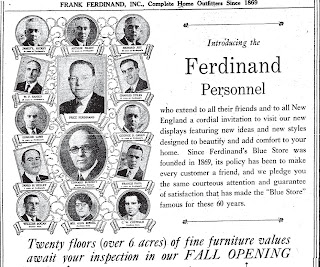 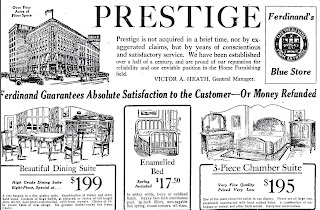 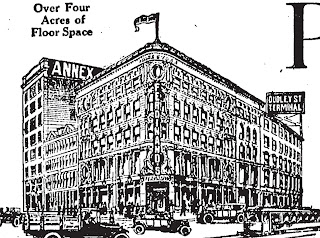 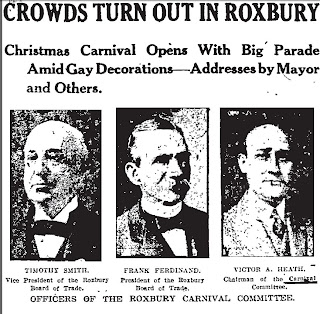 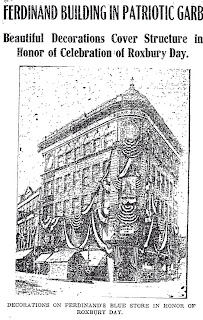 Great job! It's great to see all the newspaper articles and advertisements. They've been sitting in the archives for all these years, waiting for someone to bring them to life.

Thanks, Mark!!!! And thanks for sharing what you knew about "The Blue Store" with me!!

That has always been one of my favorite buildings in the city. i am so glad it will finally be restored. Such a gem!
Thanks again Charles!!!

I was thinking, and I seem to remember that there was a display window you could see from the elevated platform. I think that by the time I was going through Dudley station in about 1968 that the window was boarded up or covered inside with paper, but I do seem to recall the window.

Thrilled to find the article about Ferdinand's. My maternal grandfather worked there for 60 years, and I spent many a day wandering the store as a young boy in the 50's, when I lived nearby. His (Arthur Neary) picture is in the 1929 "Introducing the Ferdinand Personnel" ad.

I was curious about a Master BR suite I inherited from my Grandparents with Frank Ferdinand's metal label in the draws of the bedside tables. They were married about 1919. They resided mostly in the Dorchester area. It has the complete BR suite with head & foot boards, dresser, mirror, chest & chair and it is a cherry Mahogany all with claw feet. I would be curious to know it's value. It's still in great condition as Grandma kept most of her things covered in plastic unlike myself.