Jordan Marsh Co....Build me a bridge 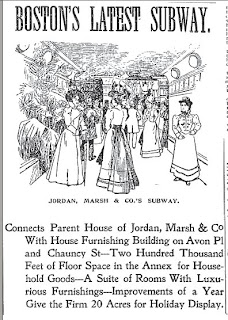 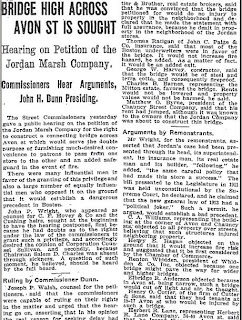 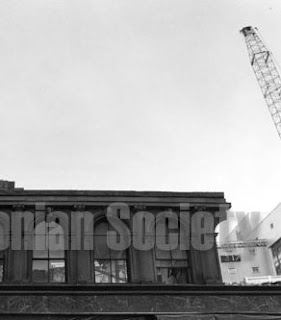 Hello, Retro Boston Lovers!
I have put together a little taster of my salute to the once great, Jordan Marsh Company Annex. By the late 1890's, Jordan Marsh began to feel a bit cramped in their Main Building on the corner of Avon and Washington Streets and the need to expand over to the other side of Avon Street became a serious need. The great Annex Building of Jordan Marsh has its roots here at this critical stage. From this point in 1898 until the early 1960's, the great Annex of Jordan Marsh grew to consume the entire block from Avon to Bedford Streets. In the years before 1920, three new buildings would be built by the Jordan Marsh Company and, in the years to follow, other smaller buildings would be acquired in this large city block. The great Annex Building(s) was the pride of the company for many years and Jordan Marsh made this block feel like one large building even though it was created by using at least seven as of the early 1960's!
The Annex was built mainly to serve as the home furnishing division of this New England giant...but more on the Annex history in a future update!
Today I share with you Jordan Marsh's need to build a bridge, a bridge over Avon Street to connect the Main Store to the ever growing Annex on the other side.
By 1898 a tunnel was built under Avon Street to connect the two but in 1914 Jordan Marsh wanted a sky bridge like the famous one in New York City built by John Wanamaker. Jordan Marsh wanted the public to cross over on any upper floors from one side of Avon Street to the other without having to go down to the basement tunnel...or truly cross the narrow street outdoors.
The Hovey Company, a rival of Jordan Marsh also on Avon Street, was not thrilled with the idea of this sky bridge blocking light and air.
The petition was approved and the project was ready to begin but...I can find no mention of the sky bridge again and the project must have gone on hold.
Why? I am not sure. I believe the sky bridge over Avon Street was built in two stages. The first was done around 1939 and connected the old Main Store to the Annex from floors three to six. This section was attached to the very edge of the old Main Store but could be detached and stand on its own if and when the old building might be replaced in the future. Very innovative for 1939 construction planning!!!
The second was done in the mid-50's as part of Unit 3 of the new building project started in 1949. This new section was attached to the older sky bridge and added more floors upward, greater width and was attached to the newer building section called Unit 3.
The one photo(Bostonian Society) I have found (so far in my searching for treasures) of the sky bridge is from 1975 and shows the sky bridge over Avon Street in the lower right corner over the ongoing demolition of the old Main Building. The sky bridge was more like a solid building and had rows of very small windows on the upper floors... also note the digital clock(2:17pm) and company name on the top.
The older section below(floors three to five) dating from 1939 had more glass windows and looked more inviting.
I recall the bridge being in use until the 1977 new building on Washington Street opened and the Annex was no longer needed by the store...1978 marked the end and it was demolished...thus the sky bridge was gone forever.