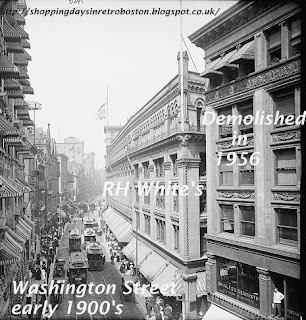 I spend a great deal of my research time digging through photo archives. The Boston Public Library’s vast image collection constantly amazes me. I find so many treasures there. Often they do not include much in the way of notations or exact dates of photography. Truly, if I still lived in Boston, I’d volunteer my time to help them add some notes to these precious bits of Boston history. I do my part, as best I can, by sharing my thoughts here with you about some of these great retro Boston photos!

Today we look at the parking problems Boston faced in the mid-1950’s.

Boston, like all other American cities of the 1950’s, faced the issue of the mounting number of homes owning cars. Also Boston was trying to get shoppers back to downtown Boston...the allure of the suburban malls was growing rapidly. Malls had the added attraction of LOTS of free parking. A huge plus for many shoppers and a big worry for Boston based merchants.

The City of Boston had a reputation for taking buildings by eminent domain and in September 1955 it took a small group of older buildings next to RH White’s Department Store. These six buildings all date to the late Victorian period (or early 1900's) and were five and six floors in height. In 1955 no special studies were done about their architectural significance, so by mid-1956...they were history. A new automated parking garage was going up and was to be ready by that Christmas.

Boston was busy building new parking facilities and the one on Hayward Place was to be the most modern by 1956 standards.

The photos seen here show RH White’s and various phases of the demolition work to prepare the place where the new garage would eventually stand....until 1980 when it would be demolished as part of the Lafayette Place project.

I have added a few notes on some of the photographs for you to enjoy...but I shall say a few more things here. Why not?

I would like to add that the little lane between RH White’s and the demolition site was called Norfolk Place. Long gone now....just like Avon Street that used to be next to Jordan Marsh. 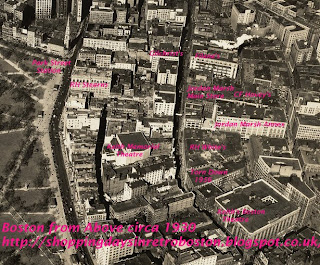 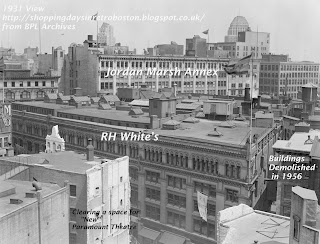 The building that fronted on Washington Street until 1956 was called the Jefferson Building and for many years the upper floors were used as warehouse space by RH White’s. Several small bridges connected the two and I have noted that on a few of the BPL photos that you see here.

It’s sad to note that even with the fancy new garage of 1956, White’s was struggling and would close in June of 1957. City Mart would come to the former White’s building in 1962 and used the new parking garage as a lure for potential customers. That ended badly when the City of Boston took the White’s building by eminent domain in 1966, tossed City Mart out and plopped Raymond’s in. Raymond’s tried to use the new parking garage as a magnet for shoppers but time was running out for that section of Washington Street and when Raymond’s breathed its last...the City of Boston tore down the building in 1973 as the start to the new Lafayette Place project. And by 1980, the 1956 super automated garage would become part of the rubble.

Also I found a great advertisement for the former Chandler’s building on the corner of West and Tremont Streets from late 1957. Chandler’s had merged with Conrad’s on Temple Place and the former store’s large building was available for use in 1958. The Thomas Diab Realty Company used the new garage on Hayward Place as a selling point, too. A great deal of hope was pinned on that garage...amazing! 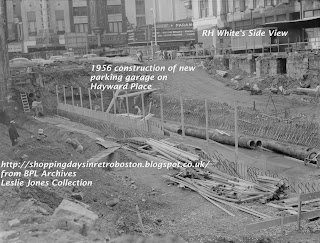 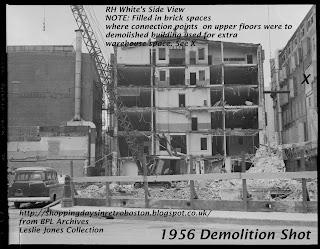 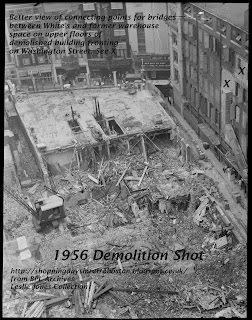 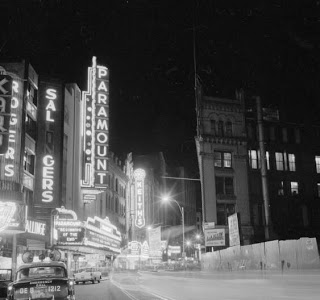 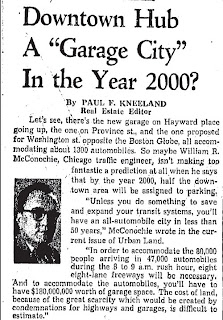 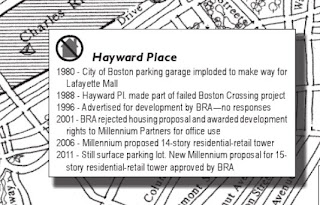 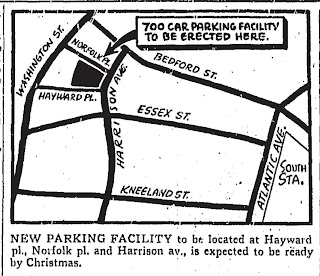 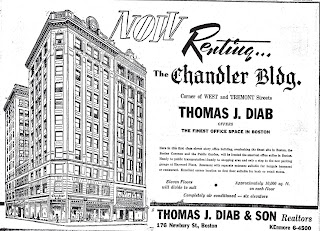 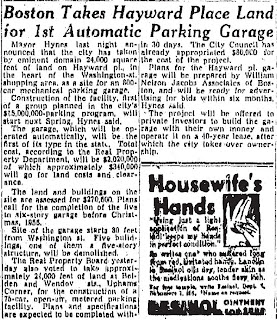 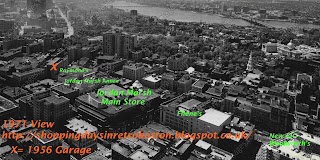 Ps... My Jordan Marsh Memory Project keeps growing...I can’t wait to share the completed work with you all in the future. I am not rushing...heavens no!! Each time I think I have enough...more information surges forth. I look forward to more input from anyone with Jordan Marsh memories or memorabilia that they would like included in my project!!! There is always room for more! Come one, come all!!!