A Taste of Gilchrist’s Department Store in Boston in 1963 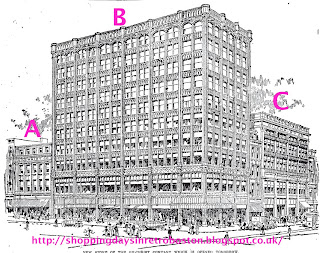 Today’s update is based on a recent request from a valued friend & regular contributor to the blog...and I just love to get requests!!! 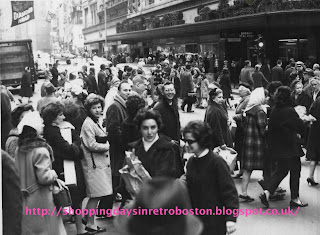 He has always wanted to know what Gilchrist’s Department Store in Boston was like during its heyday and what the floor directory would have looked like. He never had the wonderful privilege of shopping in the great old Boston store during those glory days and has always been curious about the way it would have looked back then. He knows quite well how it looks today (as the Corner Mall) and has contributed to the blog some amazing photos of the “just turned” 100 year-old landmark structure. 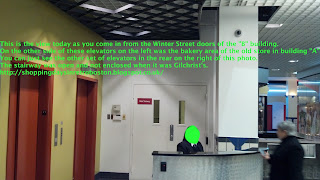 I did some digging...I just love to delve back in time...and have constructed a list of what would have been located on the various floors in the year 1963. Why 1963? It was 50 years ago and the Gilchrist Companyof Boston was really on a high as far as competing with the other Boston retailing giants of the day.


By 1963, Gilchrist’s had a healthy number of suburban branch locations and a warehouse outlet for large appliance and home furniture bargains.

I have included a wonderful artist’s rendition of the way the store looked in 1912 if you were looking up at it from the intersection of Winter and Washington Streets. I have put A, B and C on each of the three buildings that made up the entire store. This is way it was until it closed in late 1976.

The building with the “A” was one of the original Gilchrist Store buildings dating back to the early days of the store in the mid- 1800’s. The “C” building was added in the early 1900’s and joined with “A” in the rear to form an L-shape. The “B” building with 10 glorious floors was built and connected to the older structures in 1912. All this was done with the little E.B. Horn building tucked in the middle on Washington Street and never was it consumed by the growing Gilchrist’s!

The “C” building had extra floors added to match the “B” building a few years after 1912 and the store also had space in the rear and lower levels of the Orpheum Theatre building (and the old Music Hall structure previously).

The old “A” building was never topped with more floors but did house the famous bakery, home of the unique and highly celebrated almond macaroons.

The Marble Spa was in the rear portion of the joined buildings with a stairwell rising up to a doorway to Hamilton Place. Now the Food Court area of the Corner Mall is located (more or less) where the old Marble Spa was for many, many years.

Visitors today are always shocked when they enter from the Washington Street door in the “C” building and move towards the rear to the Food Court area ...they feel as if they have moved down into a basement area. The slope of Winter Street as it ascends to Park Street causes the rear of the Gilchrist’s buildings to be submerged...thus the street floor becomes more like a basement.

Today the space is all chopped up into various sectional areas and it’s hard to imagine the way it used to look unless you have a few old memories to guide you...and boy, my memories are getting very rusty!!!

The floor plan was pretty much a horseshoe shape on all the floors with two large banks of elevators on either side near the rear. 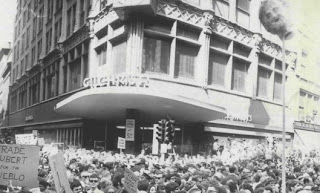 The street floor was very crowded and the busiest of all the floors of the store. Apart from the usual items seen on offer in most store street floors one must also note that the entire Men’s Department was located in the rear of the street floor as well as, for many years, all the major appliances. The larger electrical home appliances were sold upstairs on one of the upper floors for the early part of the 20th century but to keep pace with successful Jordan Marsh’s large display of street floor appliances in their famous Annex Building on Avon Street...they were moved downstairs and placed near the front of building “C” as you came in the doors from Washington Street.

The store floor directory in 1963 looked a bit like this:

Basement: All bargain sales representing most upstairs departments except appliances, TV & stereo and furniture (the later three bargain items could be found in Gilchrist’s Warehouse Store)

***Also the staff-only stockrooms & sorting areas were down here

***Plus the Marble Spa and Bakery

A sad note for those who have memories of the last years of the store in the mid-1970’s...the floor directory was altered significantly and at the very end (1976), only the first three floors were in use.

Enjoy this selection of Gilchrist’s ads from 1963 that represent some of the various items sold on each of the floors!!!

This past Xmas season brought 1000’s of hits to the blog and many new readers. I want to thank all of the new readers who have written to say hello and share your memories with me!

Plus the Jordan Marsh Memory Project keeps growing...I can’t wait to share the completed work with you all in the future. I am not rushing...heavens no!! Each time I think I have enough...more information surges forth. I look forward to more input from anyone with Jordan Marsh memories or memorabilia that they would like included in my project!!! There is always room for more! Come one, come all!!! 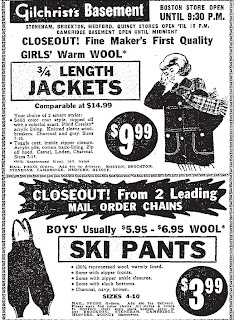 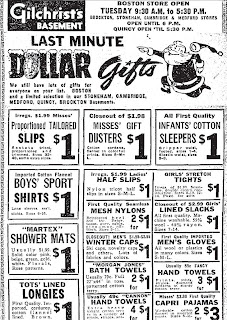 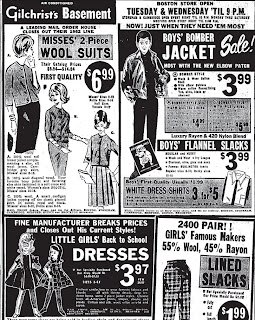 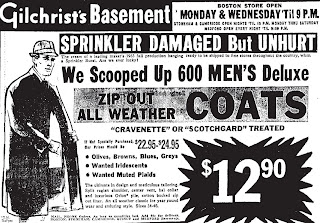 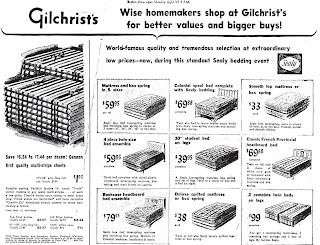 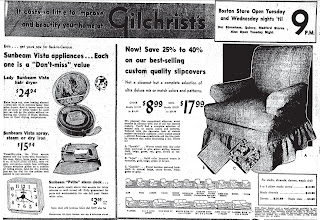 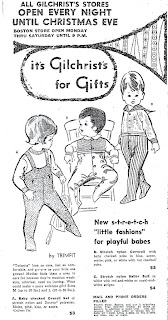 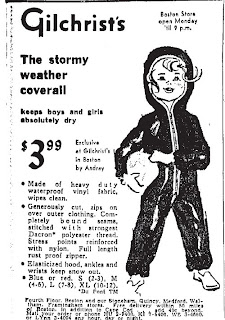 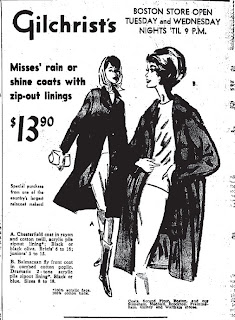 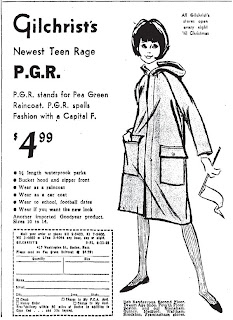 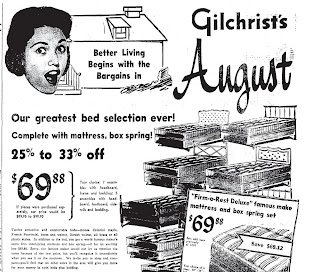 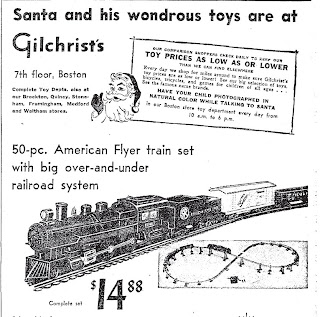 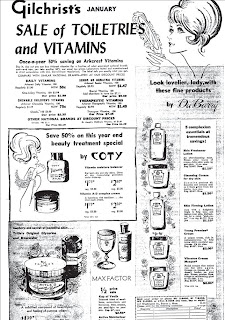 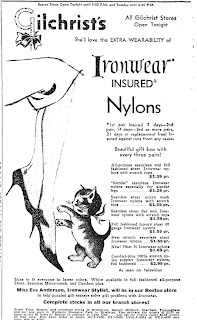 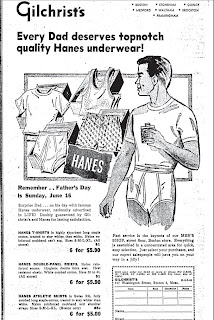 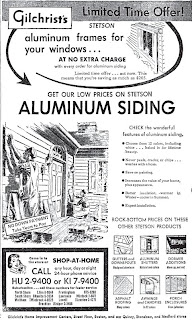 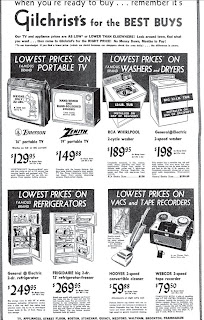 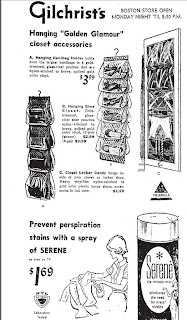 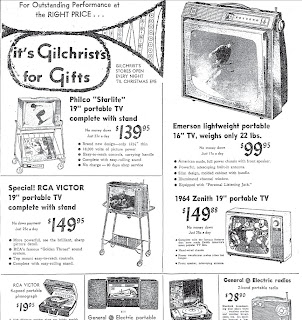 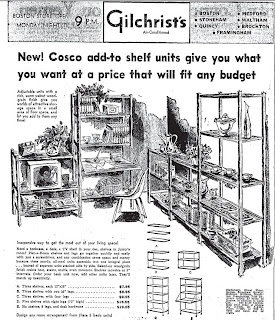 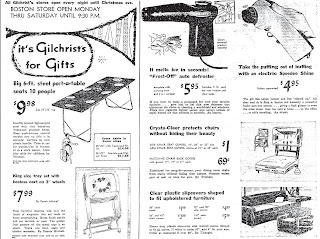 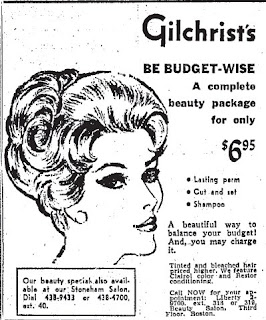 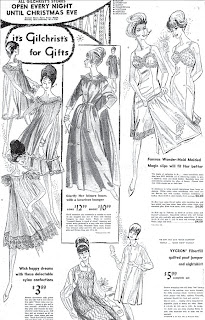