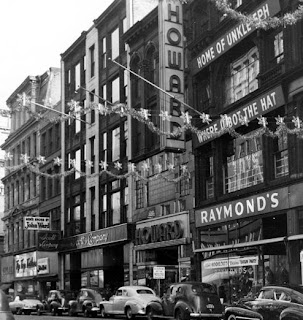 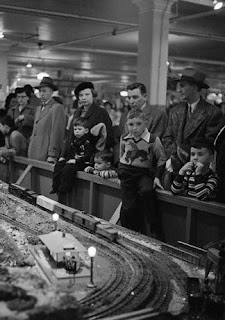 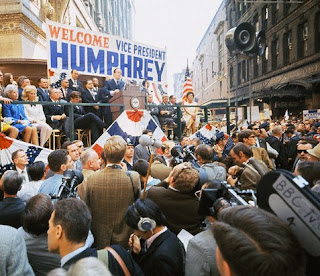 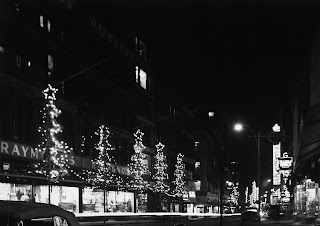 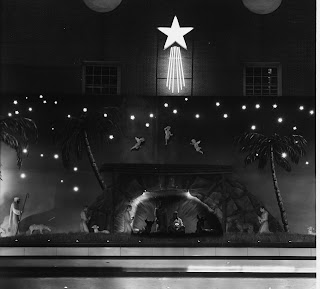 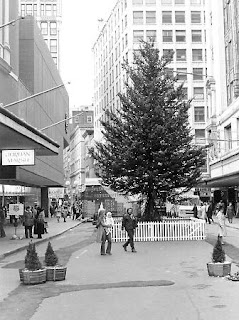 Hello, Retro Boston Lovers!!
Happy Holidays to one and all!!
I love to look at old Boston snapshots...really look at them.
You can find some great treasures hidden in the most surprising places!
Let's explore these photos I have presented today.
The Boston Bruins had a great 1969- 70 season and in May 1970 had this victory parade through downtown Boston along Washington Street with many eager fans snapping photos of Bobby Orr and his fellow team members. The photo also reveals a Boston Shopping Treasure....Raymond's in its final location, using the old RH White's store next to Jordan Marsh's Annex Buildings. I had found some vintage Yellow Pages proof of this final location of Raymond's but this was photo proof....yes!!!!! Thank you, Bobby Orr! I have a feeling dear Raymond's was not long for the retail world by 1970 and soon would close its doors for good, at least by 1972. 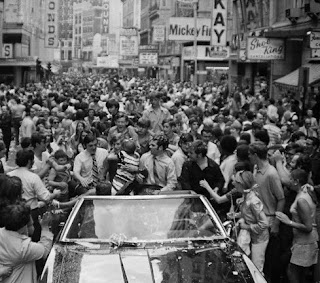 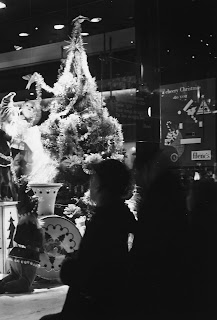 Now look at the 1951 Christmas photo of the gang looking at the train set.
This great shot was taken in a " Big Boston Department Store"....but the name is not on the photo....Mmmmmmm? I would venture a guess that it was snapped at Jordan Marsh's Annex on the great old fifth floor. Any ideas???? Write me....love to hear your thoughts on the location. The other place could be Gilchrist's on the sixth floor...Not sure...Help!!!!
Another little treasure in the group is the Humphrey shot from 1968.
I love the view down Summer Street between Filene's and Jordan Marsh.
Note the great old Jordan Marsh building that was part of the old Main Store and the wonderful ornate entrance...there was another like it on the Washington Street side. By 1975 these buildings that formed the old Main Store of Jordan Marsh would be demolished to make room for a very functional replacement....blahhh!!
Ahhh...great shot from 1968!!!
Jordan Marsh for many years used the flat roof over the sidewalk along the Summer Street windows of the "New 1949- 50" building to host large Xmas displays like the Nativity as seen here from the late 1950's.
Wow!!!
Enjoy all these little snaps and thanks for a wonderful two years on Blogger!!!
Keep visiting and writing.....More soon!!!
Charles:-)
Posted by Charles Boston at 05:20 4 comments: